Sure had a great time last weekend with a day trip to Maryville and this weekend to the farm with the Sowinkis and Browns! 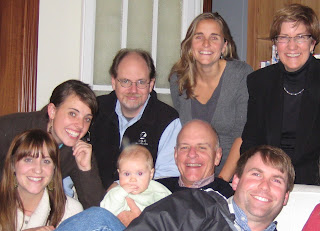 
WOW! After close to 30 hours of traveling without sleep and with an infant, Katie and I were ready to get home last night (Sunday)! Thank you all so much for your prayers that covered us during our time. I cannot imagine it going any better. Here are the highlights…

•Regional Meeting in the Netherlands:
o We arrived in Amsterdam Tuesday morning where we took a train to a little town near Utrecht, Netherlands. We stayed in a national forest in an old “mansion”, as they called it, which is owned by a Christian organization. What a wonderful time to meet the folks who are in our region. They are doing Young Life both to Nationals and International School communities in Sweden, Norway, Denmark, Belgium, Netherlands, France, Spain, and Portugal. One of the highlights was worshiping our creator with people from all over the globe. It was great to meet and get to know Jeff Munroe --the new Regional Director over Western Europe-- who will be my boss. We were encouraged to hear his vision of Young Life ministry in Europe being led by Nationals --which is already the case in much of the region…

•Time in Madrid:
o Our first day in Madrid we had a meeting with a FEDERE lawyer who specializes in helping evangelical churches with the ins and outs of Spanish law. Carolina was so helpful in answering questions and telling us important info that we will need to know. We walked away from the time feeling encouraged about getting into life and culture in Spain. One of the things we were most concerned about was getting the girls into Spanish public schools which she assured us would not be a problem. Barbara McNamee was our hero through all these meetings being our interpreter. Without her we would have been really confused and lost!

o Meeting with Jésus in Pozuelo: Yes, the director of one of the public Spanish elementary schools in the pueblo (or town) where Jim and Barbara live is named Jésus. (Always good when the guy in charge has that name!) He, too, reassured us that our girls would not have trouble getting in to one of the local schools, and he seemed to think that they would all be able to attend the same school. Also putting our minds and hearts at ease was the fact that each pueblo has a few bilingual schools, which in essence means that there would be an English speaking staff member and some of the classes would be taught in English --although Jésus did not speak English himself… Again, thank you Barbara!


o Katie and I also drove around several areas of Madrid looking at possible locations to live. We both felt a real sense of peace over a particular area we looked at called Aravaca. This is the area of Madrid where the American School is (International School where YL is currently going on).

o We also had a wonderful time with the current staff in Madrid, firming up a vision for our family and how we would fit into what God is doing in the International School ministry. It was so much fun hearing the hearts of the current interns (Kate and Anna) and sharing with them our desire to care for them when we arrive.


o Our final night, in typical Spanish style, we stayed out late and ate dinner with several committee folks who are the heart of YL in Madrid. It was so good to meet and fellowship with those who will be a part of our family when we arrive there. After getting to sleep at about 2am we rose early at 5am to start our journey home.

•Needs:
o We are still in need of roughly $10,000 in annual support to fund our budget. YL will not let us go until this is in place!

o Pray for God’s will to be done in our family. Apparently, as of late, many “Religious Visas” have been denied by the Spanish Government as they are feeling like we might be taking away jobs from Spanish folks. Pray that God would use the Visa issue to confirm His call of our family to Spain!
Posted by Chase, Katie, Alice, Mae Mae, Liza, and Tallulah at 8:36 AM 2 comments: